Makerere in Drive to Restore the Iconic Main Building 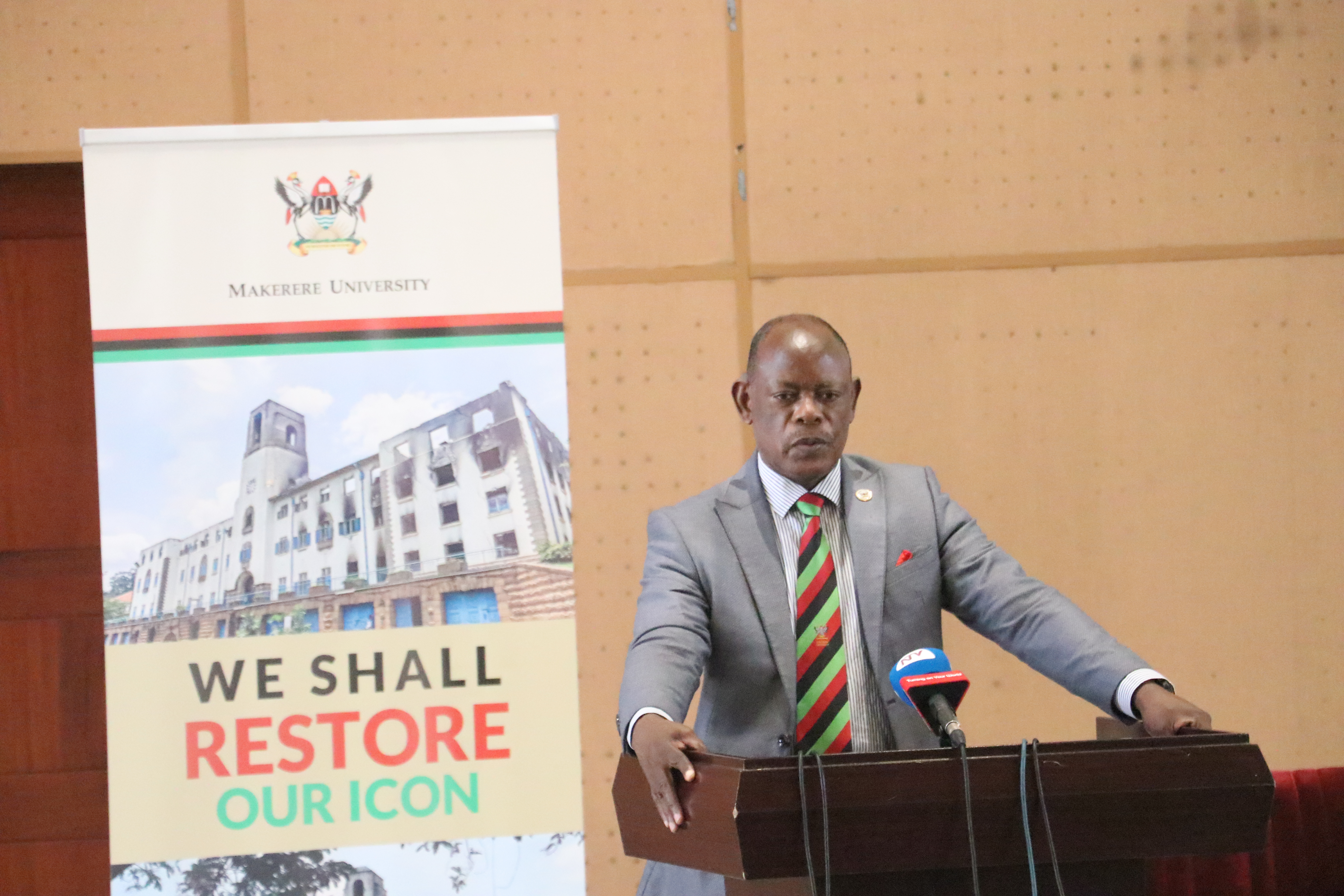 Makerere University has launched a fundraiser to help restore its administration building -The Main Building popularly known as ‘The Ivory Tower’ in the wake of fire that ravaged the iconic building, leaving scores lost.

Several office equipment and other valuable information was damaged during the Sunday 20th September 2020 night fire. The fire broke out at the Main Building — Ivory Tower — at Makerere University at 1:05am, according to police.

Dozens more have been damaged as in the fire. Fire fighters got the flames under control just after 12:30pm. Smoke was first reported just after 12:45am at the building, which is located about 200 metres from the university Police station. Police said they detected the fire via their CCTV cameras installed at the university.

The Vice Chancellor, Prof Barnabas Nawangwe has invited friends of Makerere and alumni to work together to rebuild the structure.

He cites that the main building is a very strong symbol for higher education, not only for just in Uganda but in East and Central Africa.

Before adding that; “We have to restore the building to be exactly what it was before the fire. And that is our target. We hope we will be given the report on the cause of the fire so that it helps us in redesigning and restoring the building.”

Makerere University boasts of an estimated 300,000 living alumni all over the world. In the U.S alone, there over 40,000 students while majority of the alumni are in Uganda.

According to Professor Nawangwe, a part from those that Makerere has official collaboration with, there are friends of Makerere University who are either former employees, and others.

“We have a large number of our alumni who are very concerned and who would like to see their icon restored to its previous position. And we are saying we will restore this icon to its former glory,” Professor Nawangwe says.

According to Nawangwe, the institution plans to have a major launch of the fundraising.

Unveiling the official contribution channels for support towards the restoration of Iconic Main Administration Building the Vice Chancellor appealed to all well-wishers to use Stanbic Bank Accounts: 9030017778608 (USD)/ 9030017778535 (UGX) for contributions.

He also launched a Merchant Code: 542803 for those who wish to send the money via MTN mobile money payments. To send your contribution, you dial *165*3# and Enter the Merchant Code, then Enter Amount and confirm with your Mobile Money PIN

Historic Background of the Main Building

The ground breaking ceremony for the Main Building was done on November 28th 1938 by the Duke of Gloucester, representing His Majesty King George VI. “it was an extremely important ceremony because that was the beginning of building the modern Makerere as a University following a commission of inquiry that had been ordered by the governor at that time and they recommended that Makerere should be built as a full university,” says Professor Nawangwe.

At the time, most of the funds to construct the buildings came from the colonial government in Uganda which put up an endowment capital of 250,000 pounds at the time and 170,000 pounds for the construction of new buildings.

The Main Building according to available literature took considerably a long time for its size to be completed because it was constructed during the second world war.

“Most of the materials were coming from Europe and since the war broke out and the British Government which actually was responsible for building the Main Building had to divert the resources to other things. And also, the ferrying of materials became difficult and as a result, some of the materials had to be done on site from a technical school here and most of the timber was done by artisans on site,” says Professor Nawangwe.

It housed the offices, although the top floor was initially an open space that was used as a school for the British expatriates during the war as the children could not go back.

In the 1970s, a decision was taken to partition the top floor into offices. All the partitions made were wooden. Professor Nawangwe cites that that could explain why the fire could spread very fast on the top floor.

“According to one of my colleagues who retired sometime back when he came to check what had happened he said yes, it was hurriedly done and even the wiring was very hurriedly done not in conduits but just fixed on the partitions,” he said.

The building floor plan is in T-shape, with a large imposing tower to denote its main entrance. The top-most part is bare stone, with a large bell in it and has four arches, one on each side, to allow the sound of the bell spread far, known as the Ivory Tower.

In his dissertation about Makerere University's potential as a heritage site, published in October 2019, Stanley Sempeswa cited the Main Building as the number one attraction heritage site at the university.

"In this study, 78.8% of the respondents pointed out the main building as one of the tourist attractions that influence visitors to Makerere University. The unique magnificent building due to its old architectural design similar to that of the University of London gives the Ivory Tower a visual appeal that attracts visitors to the campus," Sempeswa said.

"Designed by Newton, the building was likened to the Ivory Tower because it was literally cut off from communication and the world outside its immediate environment due to the great difficulty to reach Makerere by telephone in the 1950s (McPherson, 1964).

"The first Main Building was constructed in 1923 at the current Department of Science and Technical Education in the School of Education."

"The United Nations Scientific and Cultural Organisation (UNESCO) officers admired the Main Building and inscribed in the list of tentative properties to be conserved as World Heritage Sites (McPherson, 1964). And according to Mubatsi (2009), the structure has a unique appearance and exclusive architecture that cannot be found anywhere else in East Africa.

Sempeswa said other heritage sites at Makerere include the Main Library, the Art Gallery, the halls of residence, and Religious monuments.

The building also had a massive 1930s Gents of Leicester clock wall mounted at the entrance of the Main Hall, with a custom-built wheeled base, with a height of 135cm, width 135cm, and depth of 23cm. This clock has been functioning since 1941 when the Main Building was officially opened.

Gents of Leicester was established in Leicester, England, in 1872 by John Thomas Gent. For over a century, the company was a well-known manufacturer of electrical equipment, in particular electric clocks, which were used in public buildings and railway stations the world over.