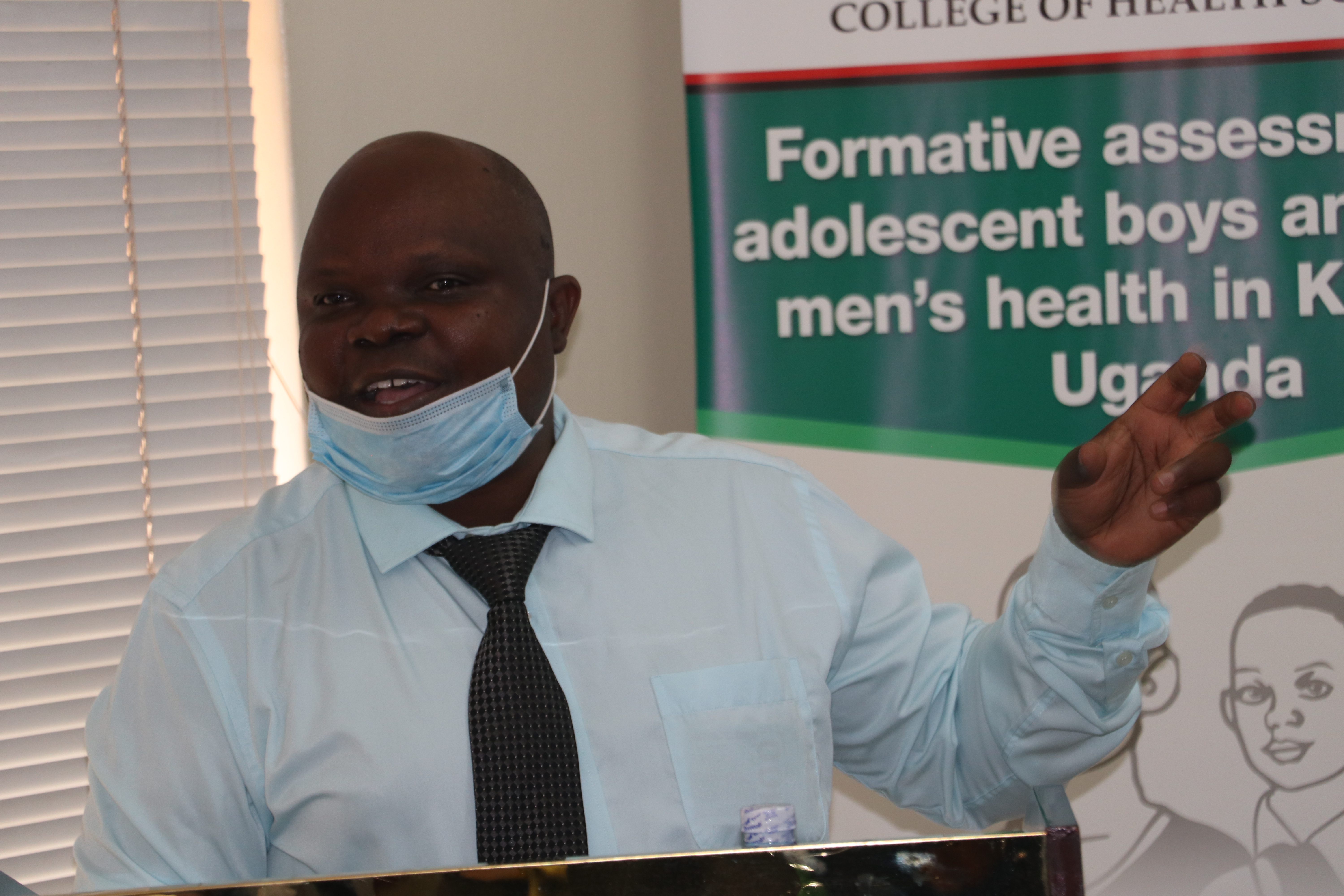 Globally, the number of people living in urban areas is growing exponentially and envisaged to reach 60% by 2030.

Concurrently, people living in these areas face daily challenges such as a burgeoning use of social media, sedentary lifestyles, inadequate housing, poor social capital and lack of access to basic health services.

Adolescent boys and young men (ABYM) form a significant proportion of urban dwellers which leaves more questions than answers on their healthy transition into adulthood.

However, although global and national data show that adolescent boys and young men have poorer health statistics compared to their female counterparts, little, in terms of research and evidence has been generated to inform the realization of the health needs of this population. Moreover, data for the very young adolescents (10-14 years) are usually missing, since most surveys enroll participants aged 15 years or older.

The study was conducted between July 30 and August 30, 2020, with funding from the Government of Uganda through the Makerere University’s Research and Innovations Fund (Mak-RIF).

As part of the study, the researchers were able to establish health needs, barriers to and opportunities for improving access to and utilization of health services among ABYM, and suggestions on how to reach adolescent boys and young men with health services.

The study team interviewed 2,500 in- and out-of-school adolescent boys & young men aged 10-24 years in all the five Divisions of Kampala District (Kawempe, Rubaga, Makindye, Nakawa and Kampala Central) and conducted 44 qualitative interviews including with adolescent boys and young men, organizations that target young people; as well as funders and other bilateral donors. Data were collected at household and non-household (e.g. work places) settings, using mobile phones.

While speaking at the October 30, 2020 virtual dissemination meeting, Dr. Joseph K.B. Matovu, a Co-Principal Investigator on the study, said the survey was informed by the growing trend towards urbanization coupled with the fact that most surveys have focused on adolescent girls and young women yet adolescent boys and young men also have their health challenges that remain undocumented.

The investigators intended to generate data necessary to enhance health programming for adolescent boys and young men in an urban setting including Kampala, given that adolescent boys and young men living in urban areas experience a heightened level of challenges than those who live in rural areas. Similar studies are planned in other urban areas, resources permitting.

‘’Majority of our urban population are aged 10-24. In addition, one-third of the urban populations live in slums where there are several risks". This will result into unhealthy lifestyles and environmental health threats. "By 2030, 60% of the global population will be in urban areas. This study will inform the integration of programs and resources for adolescent boys and young men within the Urban Health Strategy for Kampala City" – Dr. Matovu explained

The study suggests that there is a strong correlation between having a father who drinks, siblings who drink and friends would drink with the drinking behavior of the participants that were interviewed, which suggests that the interventions aimed at reducing alcohol use among today's young boys and young men should particularly target the secondary audience, the people who influence the behaviors of the adolescents.

For instance, according to  Dr. Joseph KB Matovu, a Co-Principal Investigator nearly 50% of the participants reported that they had seen a lot of alcohol advertisement on TVs in the past 30 days. "We noted that presence of these adverts, heavy advertisements on alcohol influence the way these adolescents behave as seen in the facts."

The study results have further underscored the need for adolescent boys and young men to be kept in school to prevent them from being spoilt. Data shows that more adolescent boys who were out of school had ever consumed alcohol as opposed to 23.7% compared to those who were in School.

More than half (1,335 = 53.4%) had always had breakfast in the 30 days preceding the survey. However, only 63 (2.5%) met the WHO recommendations for fruit & vegetable intake of at least 5 servings of fruit & vegetable per day in a typical week. Nearly half (48.8%, n=1220) sometimes or most of the time bought and ate street food such as chips or Rolex – a clear indication of poor dietary behaviour among adolescent boys and young men.

Among the 2,500 participants, 384 (15.4%) had ever smoked tobacco products; 3.3% had used these products within the 30 days preceding the interview. It is important to note that 46.8% (1171) were exposed to tobacco smoke in public places such as restaurant, shop, etc. in the past 7 days. These findings suggest that smoking in public places continues despite the availability of the Tobacco Control Act (2015).

The researchers also revealed only 23% of the respondents felt they were always understood by their parents while 24% felt they were always given attention/listened to by parents. Those in school and those below 14 were given more attention. ‘’While this is good, it is important to note that the older ones are more likely to commit suicide, use alcohol and illicit drugs, which suggests a need for parents to pay attention to the older adolescents. Dr. Matovu explained of the finding

More than 1 in 5 (24.8%) young adolescents and young men spent more than 2 hours per day on social media. 59.8% of respondents had ever received an HIV test. Of these, 1.7% were HIV +. Among those who had ever had sex, 18% had ever got a sexually transmitted infection.

62% reported a sedentary lifestyle such as excessive watching of TV. These effects were more pronounced among older adolescent boys (15-19) and young men (20-24) and out-of-school compared to those in school.

According to the researchers, COVID-19 had an impact on health care access for adolescent boys. 14% of out-of-school boys couldn't access condoms. 18.4% couldn't access HIV/STI testing services. The effects were higher among those aged 20-24.

The researchers found that although more than 80% of respondents were aware of at least 2 primary COVID-19 prevention measures, only 22.2% said they always wore a mask in public. Washing hands with soap - 22% avoiding gatherings of more than 5 people - 17.6%. This suggests that while the respondents were aware of what to do to prevent COVID-19, very few adolescents actually practiced the recommended COVID-19 prevention measures.

On the impact of the current pandemic, researchers note that COVID-19 led to increased mental health challenges. 70.3% reported feeling more nervous as a result of COVID-19; 1.2% contemplated committing suicide due to COVID-19, while 62% found it difficult to afford a diverse or balanced diet due to COVID-19. 30.3% experienced reduction in income.

Following the study findings, researchers have recommended the designing of youth friendly services to address the sexual health and mental health needs of adolescent boys and young men in Kampala. This can be through school and community outreaches where information, testing & referral for treatment are done. There is a need for increased attention to out-of-school adolescent boys and young men who seem to be more vulnerable. The very younger adolescents (10-14 years) should be targeted early before they engage in risk behaviors while the older ones that have already initiated these behaviors can benefit from programs intended to support them to reduce or quit these behaviors.