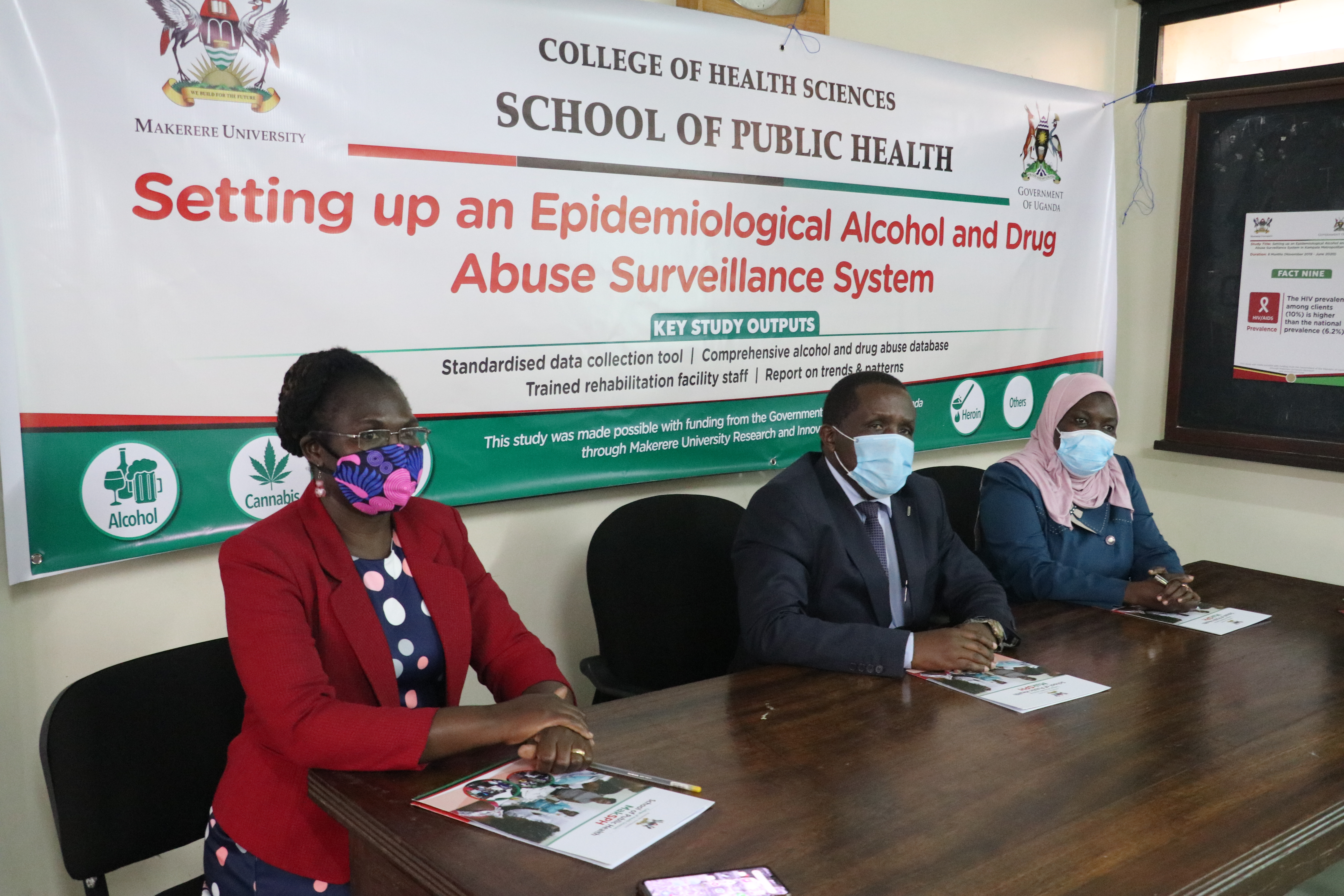 Substance abuse is one of the leading risk factors for high burden of disease globally. Although the highest levels of alcohol consumption are in Europe, Africa bears the heaviest burden of disease and injury attributed to alcohol.

According to the 2018 Global status report on Alcohol and health, the total Alcohol per capita for Uganda in the year 2016 was 9.5 compared to 6.3 for the whole Africa region.

Despite its significance to the public health burden in Uganda, these key risk factors have been largely neglected.

In the project entitled; “Setting up an epidemiological Alcohol and Drug Abuse Surveillance System,” the researchers designed a tool for abstracting information from clients’ files, trained health workers on to fill the tool and how to enter the data in a data base and how to report about it.

The health workers and records officers were shown how they can produce monthly reports from the data. As a demonstration of benefits of such a system the researchers were able to establish trends and patterns of alcohol and drug use among the clients of these rehabilitation facilities.

According to Associate Professor Nazarius Mbona Tumwesigye, the Principal Investigator,  the Alcohol, and Drug abuse surveillance system has the potential to establish the magnitude of the problem to advise policy development at the national level, guide local training, mobilize researchers and attract new research initiatives.

As part of their study findings, Professor Mbona noted that Alcohol and drug abuse are increasingly becoming a public health problem in Uganda as shown in spiking numbers of clients in 10 rehabilitation facilities. “The commonest substance of abuse was alcohol (52%) across the ten facilities in a period of eight months (November 20199 to June 2020),” reads in part, the key findings of the study.

Dr. Mbona also revealed that the majority of the clients use alcohol and drugs daily for reasons; chief among them being peer pressure.

The study also reveals that majority of the bills for treatment of substance abuse especially in private treatment centers are paid by families and or friends thereby presenting a bigger financial burden to the families/friends of the victims in a country struggling with high poverty.

The researchers also found that most of the clients are young, single and educated. While only 11% of females in rehabilitation centers were abusing alcohol, 41% of them confessed using cannabis.

“One of the reasons for engagement in alcohol and drugs was stress which in turn is mainly caused by breakup of relations, lack of money and family problems’’ explained Prof. Mbona while disseminating the findings at the Mulago hill-based-Makerere University School Of Public Health on October 14, 2020.

Prof. Mbona, who is also the Alcohol and Drugs Research Centre (ADARC)  Director further revealed that;  treatment and rehabilitation services mostly serve the urban population leaving out the rural populace.

According to the researchers, HIV prevalence among alcohol and drug abuse victims is relatively high (10.3%) compared to the national average of 6.2%.

“People who use Alcohol and drug  may not take precautionary measures like use of a condom. This owes to the fact that when they use drugs, their judgment becomes impaired. Secondly, those who inject drugs share needles and syringes which can lead to the spread of the HIV Virus’’ explained Dr. Catherine Abbo who is a Co-principal investigator of the project.

In a bid to address alcohol and drug abuse, Dr. Abbo pointed out the need for social support that is workers, families, multi-disciplinary approach as one of the key factors in the road to recovery.

Speaking on behalf of the Dean, Professor Noah Kiwanuka congratulated the research team for conducting tremendous research in the area of alcohol and drug abuse. He observed that the data from the study will be very instrumental in shaping policy to address rising numbers of harmful use of alcohol and drugs. 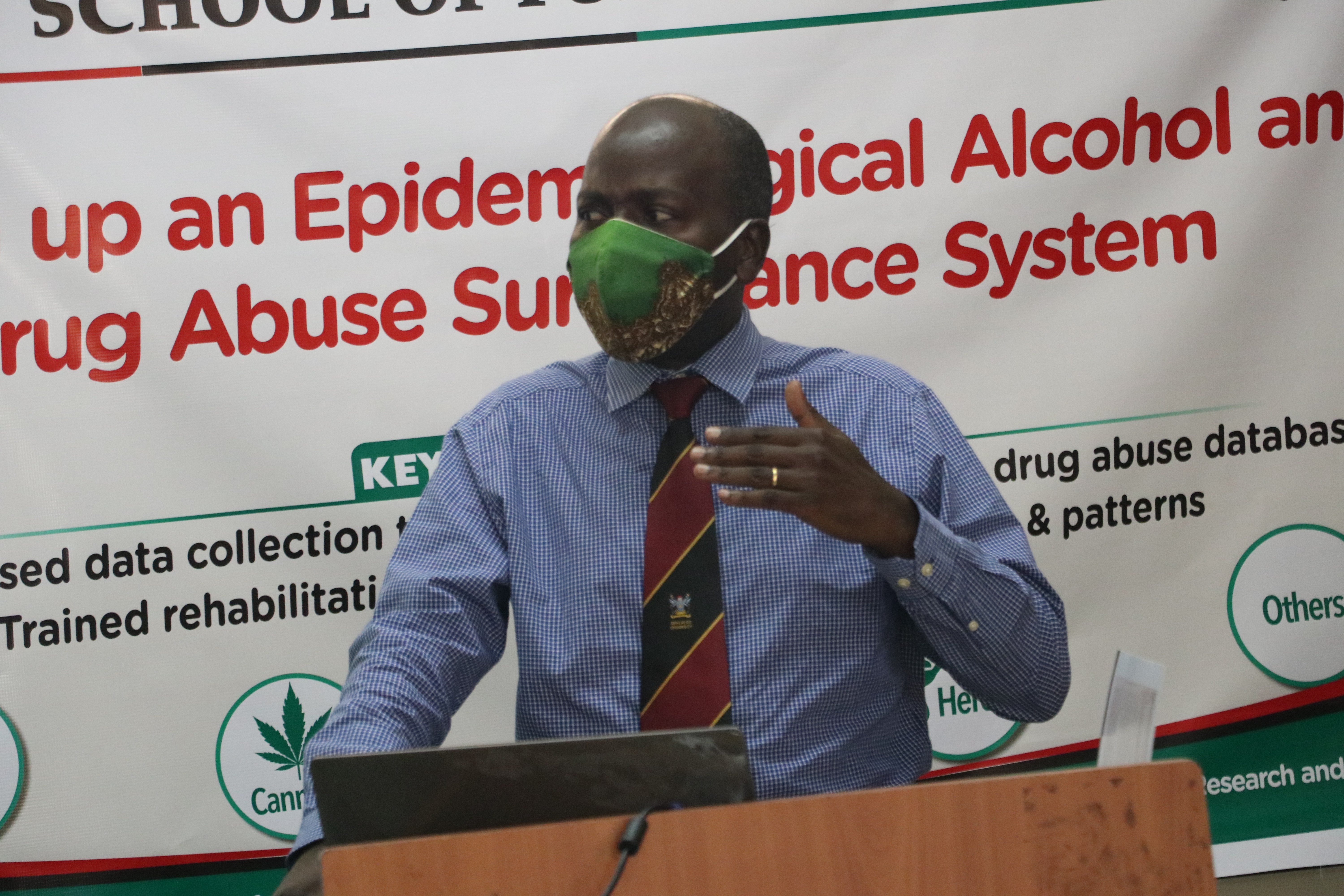 Equally, she thanked the Government of Uganda for the support towards research and other training programs at Makerere University.

1: A high proportion of the clients (52%) use alcohol as their primary substance. 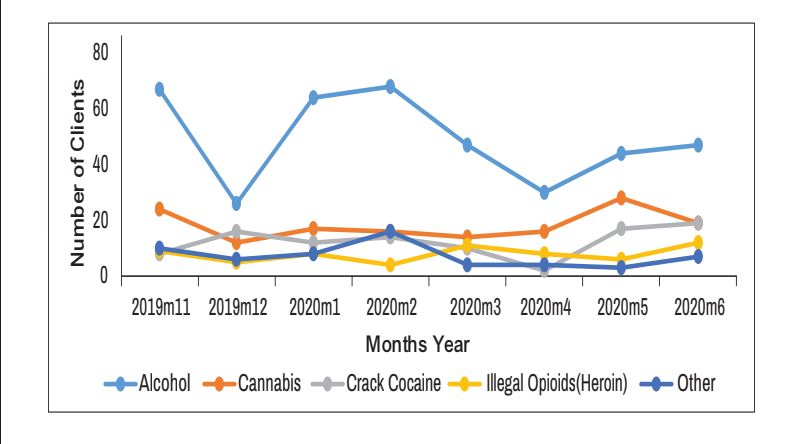 2: Majority of the clients (87.3%) in rehabilitation facilities are aged 25 years and above. 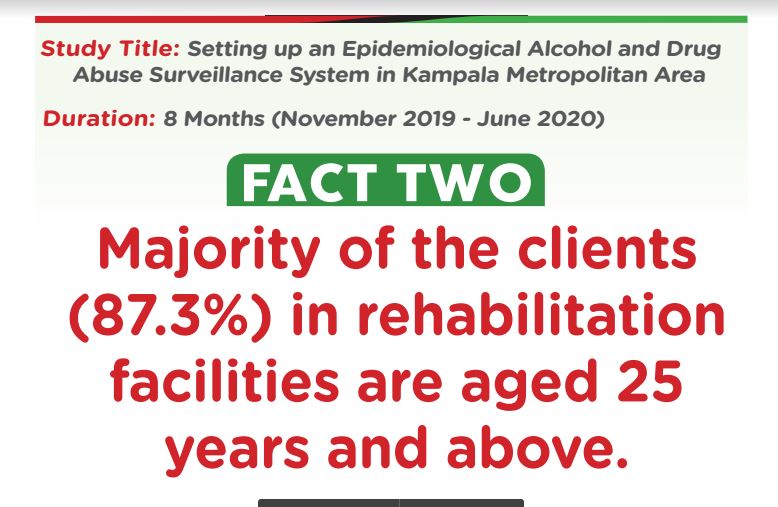 3: Most of the clients (84.6%) who abuse alcohol and drugs have attained at least secondary education. 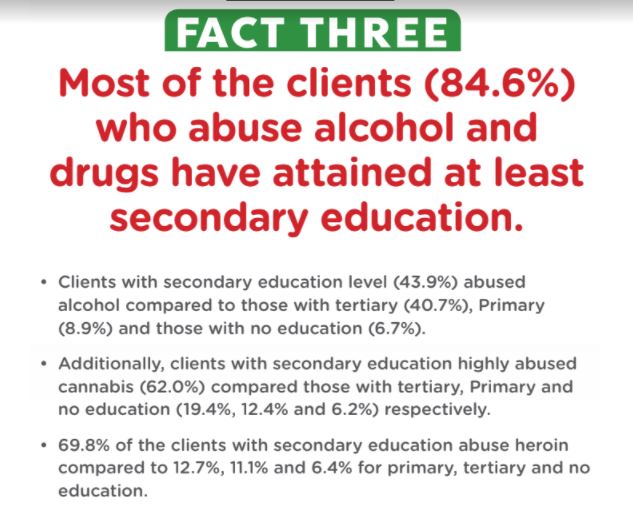 4: A high proportion of the clients obtain their alcohol and drugs from street dealers (52%) or friends (37%). 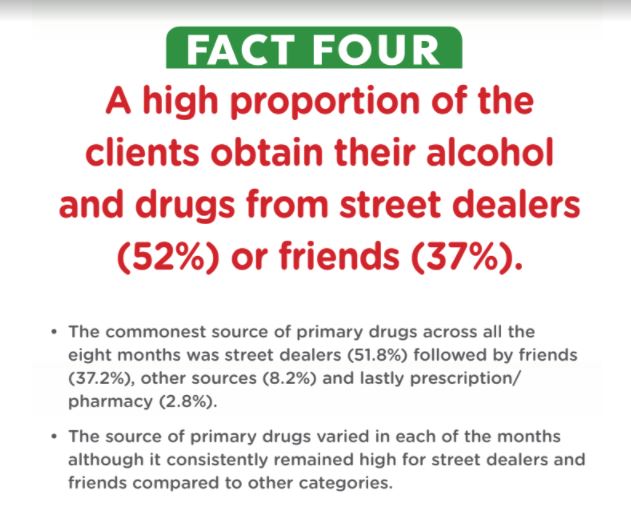 5: The majority of the clients (91%) use their primary drugs daily. 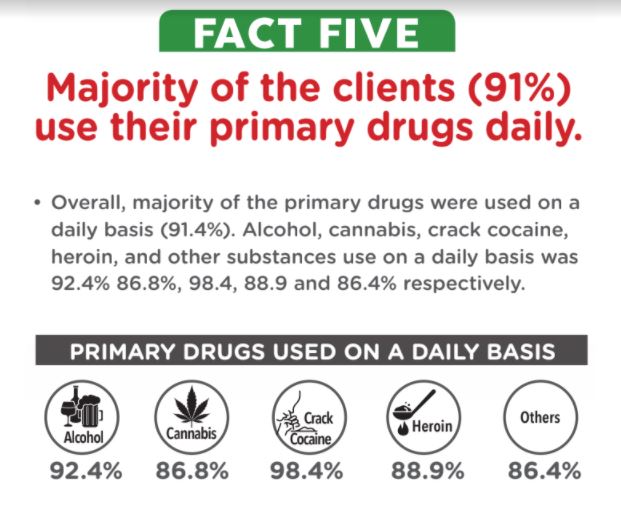 6: High proportion of clients (36%) continue to use alcohol and drugs due to peer pressure

7: Most of the clients (78%) have received treatment for alcohol or drug dependence between 1-2 times 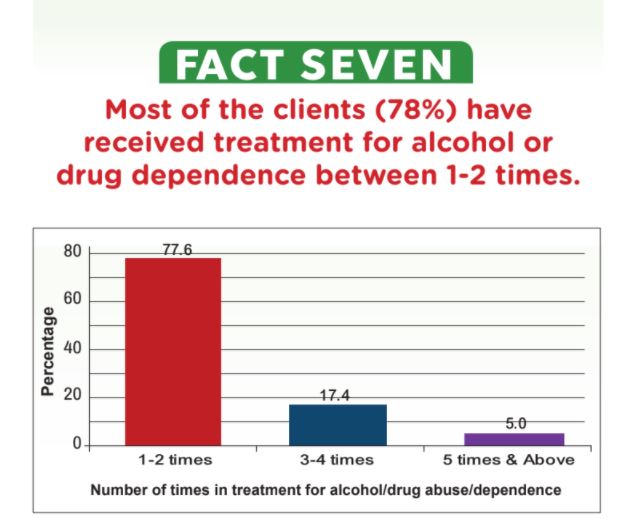 8: Most of the clients’ treatment and rehabilitation for alcohol and drugs was made by family/friends 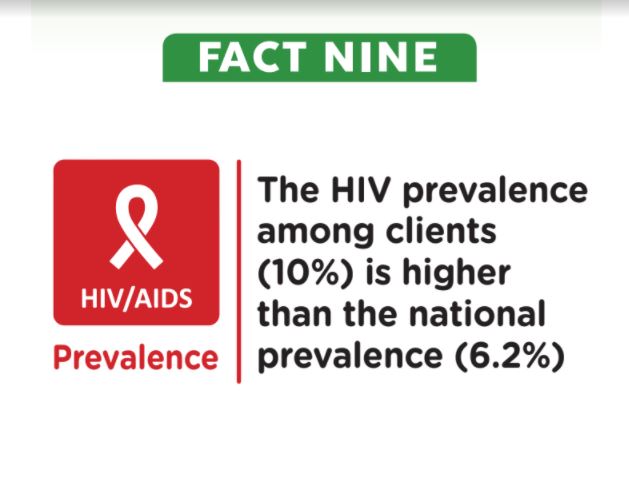 10: Age at first use of primary drugs is lowest among those taking cannabis (enjaga) compared other substances