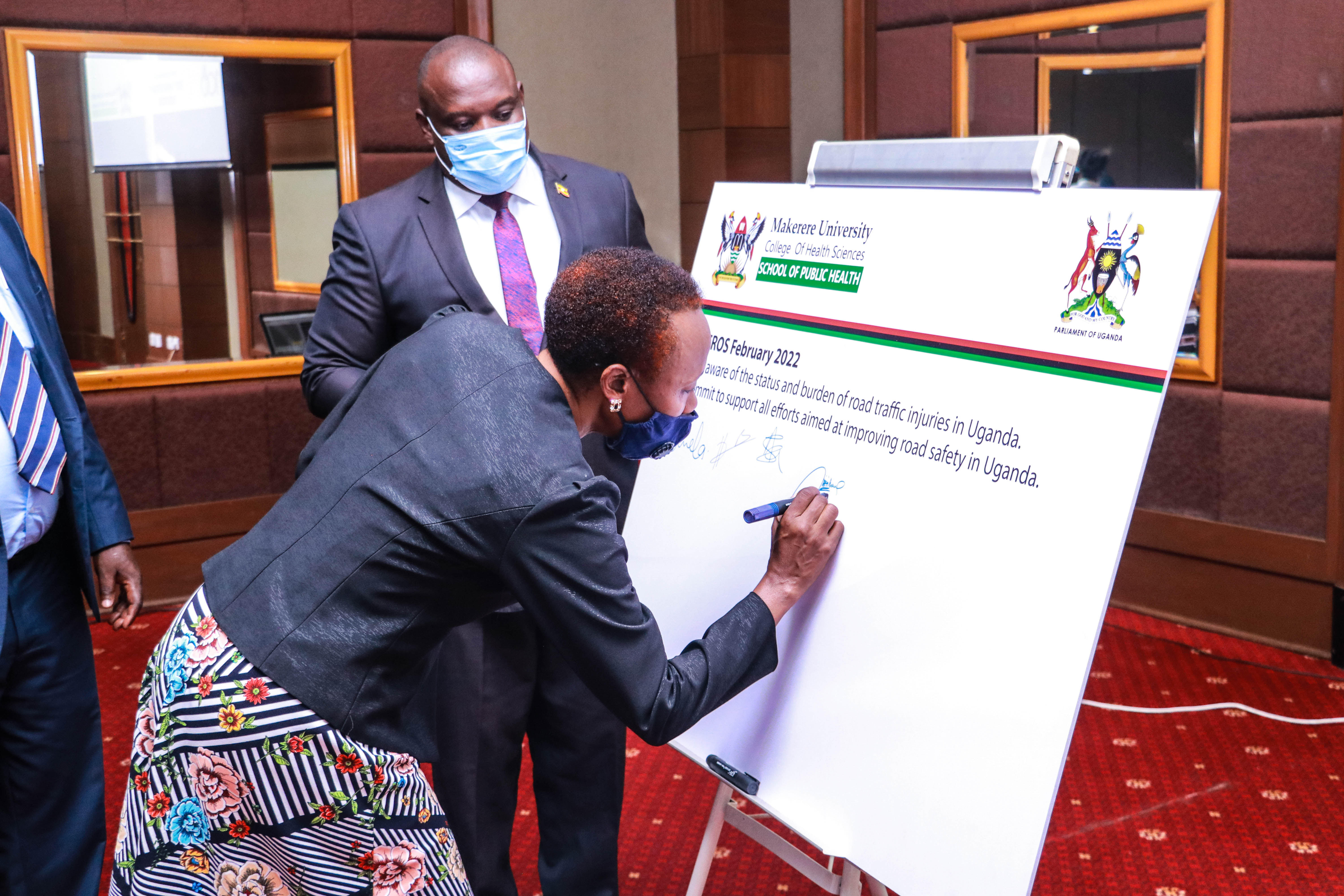 Members of Parliament under the Parliamentary Forum on Road Safety (PAFROS) have commended research efforts by the Makerere University School of Public Health’s Trauma and Disability Unit (TRIAD) for its leadership in injury and prevention research. The legislators signed a commitment to support all efforts aimed at improving road safety in Uganda.

The legislators said this while at an engagement meeting with researchers at MakSPH that took place on Thursday 17th February 2022 at Sheraton Hotel. In a well-attended session, the research team shared evidence from a number of publications that have influenced policy, and over 10-11 years, and the several achievements the School has achieved in collaboration with partners both national and international.

The 2014 WHO Global Health Estimates show high burden of injuries with over five million people dying of injuries every year. Mr. Frederick Oporia, a PhD fellow says nearly every six seconds, someone dies from an injury leaving over 50 million people with disabilities.

TRIAD’s main objective is to contribute to the reduction of injury burden in Uganda by strengthening research capacity on injuries and their medical, social and economic consequences both at Individual, community and National level.

There are various kinds of injuries that range from being intentional and non-intentional. Some of these include violence, burns, poisoning, drowning, falls and road traffic crashes. In all these injuries, road traffic contributes the highest burden 24% hence a big problem.

“When we compare HIV, tuberculosis and Malaria rates, we see that injuries alone almost double what these other Disease claim and it’s a problem we need to tackle,” says Oporia.

However, trends analysis in the Uganda Police Reports show that Uganda instead increased road traffic crashes. The SDG Goal 11 that commits UN member States to make cities and human settlements inclusive, safe, resilient and sustainable ambitiously states that by 2030, the member states should be able to provide access to safe, affordable, accessible and sustainable transport systems for all, improving road safety, notably by expanding public transport, with special attention to the needs of those in vulnerable situations, women, children, persons with disabilities and older persons.

The Road safety performance review report of 2018 show that Uganda's road safety management is managed in the Ministry of Works and Transport under the Directorate of Road Transport. Some of the road transport legislations include, the Traffic and Road Safety Act (Amended) 2020, the Uganda National Roads Authority Act, 2006, the Uganda Road Fund Act, 2008, the National Road Safety Policy, 2014 and the Non-Motorized Transport policy, 2012.

Speaking to the legislators, Esther Bayiga Zziwa, a PhD fellow at MakSPH’s TRIAD unit says however that Uganda has legislative gaps in majority of the risk factors for instance, while Uganda has national drink-driving law in place, and drink – driving based on Blood Alcohol Content (BAC) or equivalent breath alcohol concentration (BrAC), the BAC limit for the general population is way higher than the global standard. The global standard is at below 5 gram per blood liter. However, in Uganda, the law puts it at 7 gram per blood liter which is high. Ms. Bayiga says there is a need to handle this back to the global level.

Uganda has a national motorcycle helmet law in place which applies to motorcycle drivers and adult passengers and to all road types an engine type. However, the law does not require helmets to be properly fastened as well as meet the national and or international standards.

“Helmets standards for motorcyclists put up by Uganda National Bureau of Standards (UNBS) need to make sure that those ones on market meet the standards and if you are found wearing a fake helmet, you are not better off than one not wearing any because in case of a crash, it will damage your head instead of protecting it, and people need to fasten their Helmets for better effectiveness,” says Bayiga.

Uganda lacks a national child restraint law based on age, weight, height or a combination of these factors that would restrict children under a certain age-height from sitting in the front seat.

“In Uganda, even here in Kampala, those who can afford cars do not buy child safety seats for their babies and the children are carried by other adults and do not have a seat on their own. However, in case of a clash, those are the first ones that fall off the car because of their body mass and can’t survive with the normal seat,” Bayiga says.

According to Bayiga, other countries have the regulations but; “Our law does not take account any with regarding children, and probably some people think cannot afford, but this can not be compared to the lives and value of children, they too need safe seat because every life matters and a law should be put in place to address this.”

Hon. Linda Irene Mugisa, the Fort portal City Woman MP and member of the Road Safety Forum acknowledges the role of legislators to make laws and policies that would protect Ugandans.

“We have a big role of sensitizing the masses. Right now, we have very many youths who are earning income through riding boda-bodas. And the unfortunate part of this is that most of these youths have not gone through training and most of them are riding illegally because some cannot afford the driving permits. As members of parliament we feel we should advocate for the reduction in the amount of money a rider requires in order to acquire a driving permit,” says Hon. Linda.

Juliet Bashiisha Agasha, the Woman MP for Mitooma District said she was impressed by the dialogue and was excited to learn that indeed, the Trauma, Injury and Disability Unit at Makerere University School of Public Health was the only unit in Uganda that focuses on research of injury and prevention.

According to Hon. Agasha, there are many unqualified drivers on Uganda’s road who commit a lot of traffic offenses and sometimes walk away without punishment due to lack of monitoring systems. She also says most drivers lack good training and that some simply acquire driving permits without ever going to the driving schools.

“If we can have the measures that can monitor whoever makes a mistake, and then they charge accordingly, I know as Ugandans, we fear fines very much. The moment they fine you today, I don’t think tomorrow you can repeat the same mistake,” says Hon. Agasha.

She advocates for more cameras to track traffic crimes in order to improve road safety. “In fact, you find someone who is driving without a seatbelt and when he senses a traffic person, that is when he remembers that seatbelts are supposed to be used. So there is a lot of effort that we have to put in in order to reduce on road accidents especially on these motorcycles. You find a big group of motorcycles driving when there are red lights and they don’t mind whether there is red or green for them they keep moving. But if they can be controlled or sensitized about dangers of a vehicle that coming from a different direction, I believe we can reduce on the road accidents,” says Hon. Agasha.

The MP for Iki-Iki County in Budaka district, Robert Kasolo agrees that using technology in enforcement of traffic order is the way to go. He expresses concern that cameras in Uganda are largely not for road traffic law enforcement but for security reasons. “But I think that would be the ideal situation. In developed countries, cameras are part of the gadgets for enforcing traffic laws. We need to move in that direction. Policemen cannot be everywhere. But a camera can record a wider area and can be a source of evidence,” says Hon. Kasolo, who also doubles as Vice Chairperson of the Physical Infrastructure Committee of Parliament.

Tonny Ayo, the Member of Parliament for Kwania County, and Vice chairperson Parliamentary committee on Road Safety wants the Uganda Police Traffic department to begin to use the cameras both within the cities and high ways to bring drivers to book.

“One of our concerns of ensuring that people follow the traffic regulations and laws is that government put in place the cameras on streets and highways and we have spent money on this and the purpose was not only to deal with crime and terrorism but one of them was enforcement of traffic rules and regulations which unfortunately as a Forum as parliament and a public are wondering why government cannot come up to enforce this,” says Hon. Ayo.

He opines that; “When you drive along highways and roads within Kampala, the reckless driving of high speed, the bad overtaking, we expected that cameras could take stock of what is happening. We are calling on government to move in to ask police to begin to use these cameras to enforce the laws.”

According to Hon. Ayo, using video and pictorial evidence from the cameras, government will go a long way in collecting huge non-tax revenue through fines of traffic offenders.

“If we do this consistently for 6 months, then we are going to see discipline by the motorist in in this country and I think by the decade plan of action we were supposed to have reduced road crashes and injuries in the country by half by 2020. Now we are in 2022, and instead of reducing, the crashes and injuries have increased. That means now we need to act because we have noticed that sensitization and talking to people,” says Hon. Ayo.

Dr. Olive Chifefe Kobusingye, an accident & emergency surgeon, injury epidemiologist at MakSPH says TRIAD’s biggest concern is road safety and accessible for all road users. She ads that this can be achieved through good road designs.

“Designing for all road users not just for motorists. Making sure that there is space to accommodate pedestrians, cyclists, motorcyclists and accommodate those that are using wheel chairs for instance and to pay attention to the size of the population so that we in the design cater for heavy pedestrian presence, those spaces are adequate for them,” says Dr. Kobusingye.

In addition to the design, Dr. Kobusingye also agrees with the legislators on the need to increase enforcement of traffic regulations in Uganda to ensure road safety.

“There are areas where we need to enforce for instance where there is limited access to motorized traffic. These are all provided for in the non-motorized transport policy. So, the implementation of that policy is key to ensuring that transportation is safe, its accessible, its affordable and that its equitable that we do not prioritize certain types of road users over others,” Dr. Kobusingye observes.

Article and Photos by Davidson Ndyabahika.